Aarhus is a large city located on the Jutland/Jylland peninsula, it is part of the nation of Denmark.

At this time, a large town with a lighthouse and other buildings was built, however it soon collapsed, and left no signs of its name, or members.

The region was inhabited by a small town called Grenaa, which grew to about 15 chunks. It was owned by WorthyMeme, and it's known population was around 2 people. Not much more info is available. 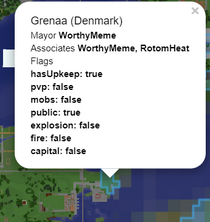 The town was founded by a British player known as __Tomm. He grew it to around 200 chunks, and eventually felt like moving back to his town, Oslo. He sold it to the Danish chancellor, Boosterr_b for around 400 gold.

Once it went under Boosterr, he expanded the town a further 50 chunks, and recruited around 15 residents. He started to expand into Sweden, to cement the Danish territorial claims in the region. He started to build there, and buildings were made.

The town, soon after, went slightly inactive due to Boosterr being busy in real life, and losing slight interest. The town stays at 16 residents, with the mayor logging on once a week for building or recruiting.