This page is similar to another, you may be looking for the Old Acadia

Acadia, also known as The Pissist Republic of Acadia, is a nation in North America founded by NetherMite13 on May 17th, 2020 A.B.G, (After the BallGod.)

Acadia is a republic with the Head of State holding ownership over the nation and the Chancellor being an elected official to represent the people. Acadia is a founding member of the Maritime East Coast Alliance.

Acadia lays claim to land in New Brunswick, Nova Scotia, Newfoundland, North Carolina, as well as holding 3 colonies; Angola, Keewatin and Western Sahara. Acadia, as of recording this information has 188 citizens and 10 towns. Acadia's capital is Saint_John, one of the most developed cities in the nation. Acadia primarily speaks English along with a dialect of Avalonese, due to their Avalonese forthcoming.

The official religion in Acadia is Pissism, though the nation has freedom of religion and does not persecute members who do not follow the Pissist faith.

After some time jumping between the rule of America an Avalon, town mayor NetherMite13 of Saint_John declared independence as the nation of Acadia. Acadia was created on May 17th, 2020 as stated above. The small nation began to grow by acquiring towns from their parent nation Avalon and Canada that had fallen on Acadia's side of the border agreement. However, an unfortunate event where the cofounder T3Z1A's computer broke for months on end led to the nation slowly drifting into inactivity.

Later, T3Z1A made a town in the northern lands of Acadia, but Quebec was angered that a dead nation was taking their possible land. The Kedgwick Border Agreement stripped Acadia of around two thirds of its land, giving much to the new nation Nova Scotia. The nation would stay small and inactive until March 2021, when NetherMite13 became active again. The nation began to quickly bounce back, reaching /n list 5 within a few weeks. Minetopia's owner Bunzo also began to become active once more, leading to even faster growth. New towns like New_Albany and Moncton were made, and the nation creeped up the /n list even further.

Acadia reached /n list 2 on June 6th, and Saint_John reached 100 members one week later. Acadia acquired its first colony on June 24th, with Western_Sahara joining the nation as a dominion. Acadia continued to grow, and in the beginning of July, unified with the now dead nation of Nova Scotia, which intern brought them into the Union of British Columbia, (later renamed back to the Salish Federation.) Acadia has continued to grow since this time, with a few hitches along the way, and is on track to become a strong regional power.

If you are interested in a more in depth look at The Pissist Republic of Acadia's history, feel free to read through the passages below detailing the events we couldn't put here and delving more into the events we only touched on! 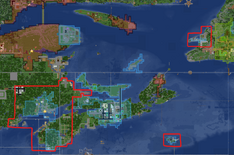 On the One Year Anniversary of the founding of Acadia NetherMite13 ratified a Constitution and updated Acadia's borders. 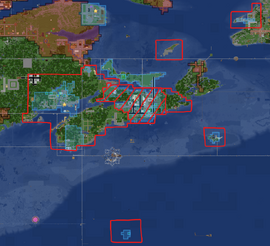 there are towns in Acadia, here they are

there is history here

kinda goes with above but ok