BarentsBy is a town located in south east Svalbard. It has 15 population with the owner being 2019s.

February: On February 27 2020 BarentsBy was founded because 2019s old town had no nation and was boring

On March 4 2019s, CubeNerd67 and Lars0507 went on an expedition to ChungusCave and met the owner and got some of the items in the museum.

The town was very inactive for the rest of march

Some time in late march/early April the light house was built.

On April 17 construction on the research station at the top of the hill started but hasn't been finished yet.

On may 11 BarentsBy joined Nordaustlandet because of Svalbard being dead

In late may 2019s got queue priority and therefor being more active.

In late may 2019s made the Lomfjorden line

On June 2 2019s finished the dam north of BarentsBy

Some weeks later the seed vault was upgraded inside to look more futuristic.

On July 14 Barentsby got its first non friend resident.

It got 2 more residents in July.

On August 22 2019s made a road to Kantbyen from Barentsby.

On August 25 2019s made a railway to pee_pee_byen from Barentsby. 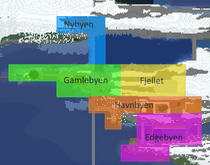