Loyalist Victory
The Battle of Thisted was a battle caused by the Thisted Coup. It occurred when Boris_Johnson, the Danish chancellor, went rogue and started a coup. He declared war on Byzantium and Britain. Danish Loyalists in Thisted asked the British Government for help.

The beginning of the battle

Royal Marines pushed the rebels back into Thisted, and onto the bridge. Here, the loyalists trapped them in between the two armies. After several minutes of intense fighting in the town square, the loyalist line broke. Fortunately, the British General Guineapigplays arrived with more British troops to assist the loyalists. Now trapped on the bridge, Boris_Johnson stood in front of the Danish flags on the bridge, and proclaimed 'The town of Thisted has fallen today, because incompetent and foolhardy leaders gave an untrusted player Chancellor'. He then disbanded the town, before jumping into the river and rowing away on a boat. King MineHero43 and a small number of British troops pursued him to Norway, where he was hunted down and killed by the pursuing British. The British nobles went inside the town hall to look for valuables and armour. General Guineapigplays removed the Danish flag, which Boris had been standing in front of, and kept it to be given to the British Museum.

Thisted was created again by the loyalists who had fought for their country. And on the 9th January 2019, Thisted was re-established.

The Battle of Thisted was the only major engagement of the Danish Revolutionary War. 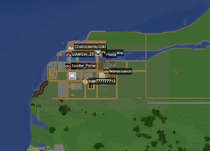 Town of Thisted after the disbanding.