Bern was founded by Judge__Judy under the name of "Alpine Gaul" after leaving the GRE. Judy's intent in creating this town was to join his friend Barvaux's France. This town is also referred in this article as "Lombardy, Romandy, Arelat" due to its past names.

Bern was founded as Alpine Gaul in the alps, at the present-day Bern mountain enclave. Judge__Judy expanded the town greatly in the first stages of the town, making a giant hollow claim in the alps. Eventually, he decided to start claiming north of the alps. The claims north of the alps were filled in.

A Time of Expansion

It was in this period that Bern acquired the majority of its claims.

In early May, the town, now named Romandy, was kicked out of France by King Cragno I. This was due to Cragno and Judge__Judy's political differences. Romandy spent the first week refusing to join a nation.

Bern's hollowclaim was reported by the new nation of Switzerland after it refused to join them. This event was really upsetting to Judy and prompted him to leave EMC for 7 days.

The German Kabinett demanded Judy hand over his town to a Swiss person. Judy refused, however no action was taken as the town did not have a nation. Heinikin, Kaiser of Germany said that Germany would declare war on any nation Bern joined.

Things weren't looking good for Bern, then Romandy: It lost half of its size, it was kicked out of France, and it was now at war with Germany. However, Judge__Judy wasn't going to cave...

A few days after Romandy's hollowclaim was removed and it was expelled from France, Paris suffered a massive grief by a trusted councillor, Mocc. The Eiffel tower was destroyed and the Louvre raided. This event set the course for the French Revolution.

Following the grief, King Cragno abdicated and took a back stage on EMC politics. Cactusinapumpkin was made the new King. This made way for a potential re-entry of Bern (Romandy) into France as Judy's political allies lobbied for him.

The vote and the chaos that ensued came when Lyon mayor LogantheProdigy (Vwon), who was a prominent figure in French politics formally proposed a vote. This caused mass chaos in France as senators argued about the re-entry.

From the chaos, a group calling itself "Operation Rampjaar" formed between many prominent French members that supported Romandy's re-entry. Some of its members included: Fmr King Barvaux I, LogantheProdigy, Thanamos, Judge__Judy, and Lamye. Its goals were to replace King Cactusinapumpkin and to get rid of Mikey, Benja, and Sambor_P. Rampjaar members drafted an ultimatum to Benja, Mikey, and Cactus; prominent members of the French government.

Ultimatum Refused and 10 Days of War

When the ultimatum was sent, its recipients refused. This begun the secession of separatist towns and the beginning of the First French Civil War. The separatists, known as the Royalists weren't planning on owning a nation, allowing them to fight the civil war without the intervention of the Coalition of Europe and Germany.

Meanwhile, Germany and Switzerland were still at odds with Judy. In a smart move, Romandy joined Britain right after Germany violated a border treaty with them. At first, the Swiss made fun of Judy. With the help of Angloist, mayor of Dublin, they started a battle at the border between the Swiss capital and Romandy. The battle was a humiliating loss to Switzerland and Germany. The next day, Britain and Germany managed to fix the border situation so Romandy left the nation, thanking them for their hospitality. This defeat forced Switzerland and Germany to re-negotiate a fair deal with Judy. EchoOcelot, the mayor of the German town in British claims who started the conflict; and Angloist, the British mayor that helped Judy start the conflict, will be glorified in Bern via its buildings.

Following Switzerland's defeat at Zurich, Judy and Swiss foreign minister Bunny reached a new deal: Judge__Judy would keep the town that would be shared between both France and Switzerland.

After 10 days of civil war, the revolutionaries and King Cactusinapumpkin reached a deal, beginning the French Republic.

A Victory for Bern

Judge__Judy, as a member of the revolution was promoted to Minister in France's new republican government. In the span of a month, Bern came from being kicked from France and hated by its leaders, 1-upped by a new Swiss nation, and at war with Germany, To being in France's highest council, an important member in Switzerland, and a citizen of Germany. 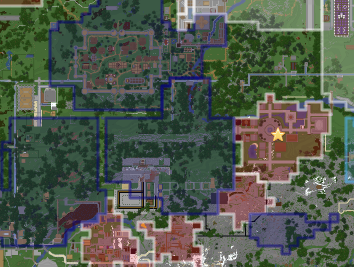 This is a required field to detail important members of the town historically or currently, so it's easier to tell which people are in which area and to get a better idea of the region. This can be organized in a list, for example:

Flag:  Designed by Judge__Judy/kip#4804/hisahito. The red background in Bern's flag represents the Britain's victory over Germany/Switzerland at the Battle of Zurich. The Fleur de Lis represents the town's French history and participation in the Royalist side in the French Revolution. The white cross symbolizes the Berner Munster, a planned Anglican cathedral that will be the town's main site once it is completed.

Retrieved from "https://earthmc.fandom.com/wiki/Bern?oldid=47696"
Community content is available under CC-BY-SA unless otherwise noted.