Nations which use religion

Unknown
Birbism is a religion that worships the Birb, their holy figure.

The king of Svalbard, Bobberson, was strolling around in Svalbard when he saw a birb descending from the skies. The skies were glowing and the birb descended, giving Bobberson the Holy Seed. After this, Bobberson immediately began construction of the Birb Church, to worship the birb. Parrots and alike are considered holy. Any use of this religion before Bobberson is unknown.

Borb
Equivalent to an in real life pope, the Borb is a role given to the founder, Bobberson. Basically the Pope.

Birb
Equivalent to a Saint or Bishop, Birbs own Churches or have helped in Birbism in a significant way

Berb
Regular followers of the religion, go to Birbism churches to worship 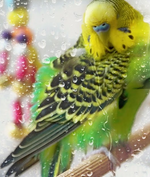