Micronesia is a country in Oceania which was formed on December 30, 2018. New Britain and its residents were unhappy with the ongoing conflict between The Solomon Empire and Qin, and decided to secede from The Solomon Empire to create Micronesia. Other towns soon followed suit and joined Micronesia. They also boast own a major shopping district which produces a lot of the gold used to grow the towns and nation in general.<section class="pi-item pi-group pi-border-color"></section><section class="pi-item pi-group pi-border-color"></section>

Micronesia was formed on December 30, 2018, after almost all Solomon Empire towns declared independence then founded Micronesia. The towns left because of tensions and raids between the Solomon Empire and Qin which the majority of towns and members believed was mostly caused by leader IanSpace71's poor handling of the situation. (Soon after, Ian left the Solomon Empire which reformed into Vanuatu.) Rapid expansion across eastern New Guinea and the islands nearby followed, most notably John_Yuki's Alexishafen which was founded with profits from his store and quickly got more than 10 members.

In late January 2019, due to rising tensions and other issues, members and towns from Terra Australis started to move to Micronesia along with various valuable items including a beacon.

During early April 2019, FutureCW decided to sell the nations of Micronesia to Tosiwo_Nakayama for around 2000 Gold.

Micronesia is located on the Melanesian island group with most of its major cities being on the islands of Papua, New Britain and New Ireland. The island group exhibits lush rainforests and wildlife. Many of the rainforests are untouched because of efforts to keep the ecosystem intact. The climate is tropical all year round because of its proximity to the equator. The lush islands are rich with resources such as gold, iron and lapis lazuli. Its soil is also the most fertile in the world

A part of Micronesia is located in the North of the Australian Continent. The cities of Cape Melville (North of Australia) and Arkala (Southwest of the island of New Guinea) are visible on this map. 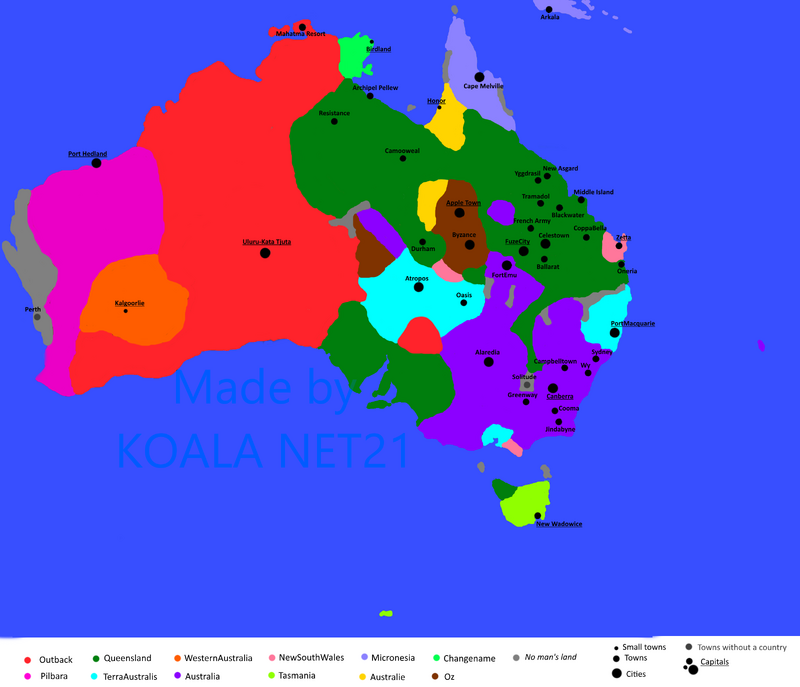 The largest factors of the Micronesian economy are tourism, raw resources such as gold and iron, and crops and fish. Tourism is a big factor because of shopping and trading hubs like New Britain and Port Moresby which brings mass amount of gold from its trading and shopping centers. Also many people visit to see the lush and dense rainforests. Since Micronesia has a lot of natural resources it exports a lot o gold and iron. Fishing and turtles make up a large factor because it has many fish and turtle which are very rare in all other parts of the world. Crops are also sold frequently because of its extremly fertile soil. Potato is its most exported crop.

Retrieved from "https://earthmc.fandom.com/wiki/Micronesia?oldid=20741"
Community content is available under CC-BY-SA unless otherwise noted.