Persia was founded on January 1st of 2019, becoming the first nation to be created in 2019 of Terra Nova.

Persia is primarily located in southern present-day Iran. Persia has multiple towns such as Susa, Qeshm, Dubai, Uruk, and Persepolis running along the coastline of the Persian Gulf.

Position in Relation to Other Nations

To the northwest is SPQR, Georgia, Turkish_Republic, and Greater-Armenia. Southwest across the Persian Gulf is Qatar, Saudi Arabia and Yemen. Far west is Israel, Aegyptus, and Ancient_Egypt. Far northeast is Bactria, Turan. To the Southeast is Pakistan, Maurya_Dynasty, and Gujarat.

Persia's infrastructure consists of multiple lines of international and domestic iceways and some domestic roads between towns.

There are several, domestic iceways that run between most towns of Persia and some fallen/ruin towns. There are multiple hubs that connect these iceways including the towns of Uruk and Pasargadae.

All though all Persian towns are unique Persia had a general architecture which is a usually a mix of Classical Roman and Ancient Persian architecture. While it is not enforced by the state, mayors and citizens have encourage each other to build in this style.

Persia's capital, Pasargadae, was founded in November of 2018 by Naptune after guessing a player's birthday in chat. Naptune was rewarded enough to create Pasargadae and expand. Naptune never was eager to recruit but had many temporary residents and one assistant, Bandhi_. They helped with much of the town's buildings, but the Persian territory was mostly empty with little visitors. The two were much self-sufficient and sufficient of each other.

One visitor to the territory was a rival claimant part of Iraq focused on attacking one of Pasargadae's allies, the Byzantium Empire. Once the creation of Persia by Naptune, the claimants disappeared into the desert sand.

Persia was founded by Naptune on January 1st, 2019 becoming the first new nation of 2019. After founding Persia, Naptune hosted a firework show in the capital, Pasargadae, to commemorate the historical moment.

During Naptune's reign, Naptune focused on funding towns on the coast of Persia and kept Pasargadae quite small.

Due to real-life concerns of Naptune, the nations were sold to CorruptedGreed for an undisclosed amount. Naptune felt joining the GRE was the most beneficial option for Persia to be stable in the region.

CorruptedGreed moved from Phillipopolis (now known as Thrace), Byzantium, to Pasargadae, Persia, when Naptune sold the nation to him. He started work on developing the nation by expanding the capital and recruiting citizens to become potential mayors.

The increase of activity in the capital drew the attention of neighboring enemies, primarily ISIS. The Caliph watergod began attacking Pasargadae and other Persian towns by pushing minecart tnt into claims, which often resulted in instant death. With help from heat1804 due to the ongoing war, many new citizens were killed. Citizens were advised against going near the edge of their claims, and eventually the attacks became less with the threat ending.

The blaze grinder in Cyrus's tomb was upgraded from 1 spawner to 7, along with the main avenue of the city being established. Notable people working on building the capital at this time were AD31 and sheast21.

After being named Caesar, CorruptedGreed passed the nation down to AD31 to head to Constantinople. He left 750 gold for the development of towns in the nation's treasury.

Once AD31 took the role of the ruler of Persia in March, the ambitious town of Nineveh was founded by ambitious Mayor Sargon2002 (Now: Daddy_Stirner). As his town rapidly grew, the town was nearing to become the most active on EarthMC. The town slowly became arrogant over their activity and began plotting against Persia in April. Sargon2002 began contact with Greater Roman Empire (GRE) Leaders for assistance in overthrowing the crown. Nearing May, the town of Nineveh slowly died off, with Sargon and residents going inactive.

In June of 2019, many tiny towns in Eastern Persia attempted to break away and create their own nation, but all were quickly shut down by the queen, AD31. The town of Avion lead by Mountzilla began breaking their loyalty to Persia to create their own state. Fed up with many other towns, the queen called in Greater Roman Empire Legionnaires to harass Avion members to join back. Bravely the queen traveled to the town without potions and was killed. While the conflict grew, many other nations grew their attention. Specifically, the nation of Somerset which had a great dislike for AD31 invested in the war against her and the nation. One thing started adding up, the AD31 learned Avion had a secret relationship with Somerset and called for assistance from them. While Somerset was traveling to reach Avion, the nation of Niger also joined the conflict. With now 3 nations battling, all of the Avion town members logged before a single could be killed. The only death was the queen, AD31 being ganged up on, chased down, and brave enough to stay even without pots. The war concluded with a victory and the mayors of Avion surrendering to Persia to give up his town to be given to the loyal Persian Nuttez.

At end of July 2019, The leader of Uruk, Pastersnacks, had over 60 citizens at the height of Mesopotamia's Golden Age. However, he decided to turn on town taxes, which taxed all citizens in his town of their gold. If they did not have gold, though, they would be kicked from the town. This caused him to lose most if not all ciitzens, causing Persia's population to drop greatly and also ending the Mesopotamia Golden Age.

Rise and Fall of Iran 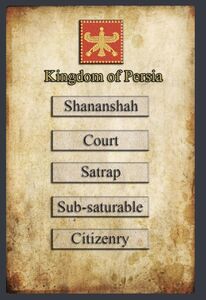 The governmental system of Persia derivatives from ancient Achaemenid's government. The government of Persia sets precedent on achievement and devotion to make Persia great.

Members of the Royal Family are the figurative( and sometimes literal) kin of the royal leader of Persia. The Royal Family is composed of town mayors and heads of Political Ministries of Persia.

The Satraps of Persia, important towny mayors usually of large towns, manage the affairs of prefects of Persia which are certain areas of persia such as Susa, Mesopotamia, Media, Armenia Major, Bactria, & Gedrosia. Sub-Saturables of Persia, usually mayors of smaller towns or influential citizens, repersent their town in their prefect of Persia.

The following people have facilitated a unique contribution to Persia with their past or contemporary presence, and are made note of here.

(Listed in order of Creation)