Polish Kingdom (Polish: Królestwo Polskie) – Nation in Eastern Europe that contains 25 towns and over 120 residents. 16th biggest nation in the world, located in the east in Europe, also have their colony on Tasmania, in Australia under jemenik's control. Allied with Latvia, United Australia, and Bosnia, also belongs to Entente Alliance. Most of the Polish residents are native Poles speaking in the Polish language. Second minor language, English, is used recently on Polish colonial territories.

Poland is divided into four administrative regions under the management of senators elected in democratic elections:

Also, the Polish Kingdom has got one big colony in the south of Australia, named Polish Tasmania. It covers areas of Tasmania Island and Victoria.

Most uninhabited areas are filled with forests. In the Carpathians, however, there is a mountainous spruce forest. The main rivers flowing through Poland are Wisła and Odra. Also, Polish continental territory is filled with old ruins, fe. fallen Krakow, old Koszyce and many, many others. Bordering with Baltic Sea that is cold, big sea.

Polish infrastructure is still developing and it's quality is growing. Polish Kingdom has got the best underground communication with over 20 towns and developing ice-road highways right now. The longest ice highway on Continental territory is road HA1 from Kosice to Gdansk and near cities. 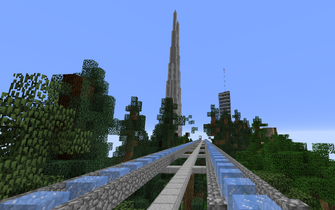 The current list of Polish government (2nd of June 2019)

Polish military is under Government control and under the management of the Marshal. The military is divided into 3 ranks: Marshal, General, and Soldier.

Poland is a member and founder of Balto-Slavic Alliance with Bosnia and Latvia. Poland has got a good relationship with the majority of countries, except Denmark.

Poland was founded on November 9, 2018, by MlecznySernik (now mlecz_). Work on establishing the state was started already in August after the announcement of Terra Nova. Mlecz_ for a long time was looking for players to create Poland. The first capital was Gdansk, which was then the largest polish city.

Before the terra nova start, 3 players decided to overthrow Mlecz and take power in the kingdom, they were: kacp222, Panciast (Kokuczuwek) and Tymkowsky. Because of that Mlecz decided to put them all in one city - Szczecin under Zuki19's controle.

Shortly before creation of Poland, one town was rebellious, it was Bornholm with Mogion at the head. Szczecin decided to leave Poland too and together with Bornholm joined to the Denmark. There was an unofficial war between Poland and Denmark, Sweden has declared help to Poland in the event of open conflict. Later Szczecin was occupied by Poland and returned to its borders, and the city was punished with 200 gold for treason which were never paid.

Poland was trying to sign an union with MinskanRus but finally it ended in failure.

Romanians provoked Poland to war. The peace treaty between the Polish Kingdom and Romania has never been signed.

18th of November the polish army consisting of Hacuspl, Snowyy4K, xHyper20 arrived in Allenstein at 15:56 CET. Two minutes after, FenZenyatta arrived to help the polish army in defending the danish town of Allenstein. As the battle went on, 32Gold died many times to the Polish-Danish forces while Pengun78 managed to stay alive for a long time through retreating when being at low health. It is not sure if any polish or danish fighter died during this battle. At around 16:20 both sides got reinforcements. The Polish-Danish side got help from doriendragon, gato3, VaPoo_ and kacp222 while the Romanian side got Alberto__ on their side. The reinforcements really helped the defending side, letting them win every battle in that town.

After 40 minutes of fighting in Allenstein, many soldiers went back to their towns to get resupplied. Suddenly 32Gold appeared in the Polish capital, Gdansk and he called in every pole to fight him there. The polish side ended up with most victories and after 20 minutes, the battle ended. The attackers ended up leaving and the poles were celebrating their victory.

The leader of Romania heat1804 asked for a peace and he said that he will pay symbolic 15 gold of war reparations. Despite this, Romania didn't pay Poland and they didn't want to do this. Polish government decided to attack Bucharest and force a payment. Poles with General MlecznySernik at the head gathered in Constantinople and from there they went to Turnovo and finally to Bucharest. heat1804 saw kacp222 and bartek50b. The battle has started. heat1804 was killed as the first person in this battle by bartek50b. Later the battle moved to the entrance to the city. Romanians died a lot of times. After some time Adolf_Hitlar came to Bucharest to support Romanians at war. Poles were fighting very well, but after long fights one of them - patryk425 died. Later king of Poland xHyper20 died too. Romanians didn't want to surrender despite all the time they died. Finally Romanians stopped leaving the city to fight and Poles returned to Poland celebrating the victory. It was of a few battles of the Polish-Romanian War and one of the biggest battles on EarthMC.

30th of November 2018, MlecznySernik gave power to the xHyper20, because he said he needed a break.

In 22nd December Great Moravian Empire demanded, that Koszyce should belong to Slovakia's part which was a huge part of GME. When Poland refused that proposition, GME declared war on Poland. First, a small Moravian forces went to Koszyce to peacekeep and try to convince them otherwise. The Moravians lost few soldiers while trying to get in line north of Koszyce, while the Polish forces made a line to defend Koszyce inside it's claims. Few charges were made, but no significant damage was done to either side. Eventually Moravians forces withdrew, making the Polish defence of Koszyce successful. The Moravians lost few people, while Poland only lost one.

Only a few hours after the Moravian withdrawal from Koszyce, a massive Polish army moved to Prague. There were only 2 Moravians to defend Prague against more than 10 Poles.There were some clashes outside of the town, where the Polish King was killed. Not too long after that, PVP was enabled in Prague, making the Polish vulnerable with nowhere to retreat. After a few minutes of battle, and a few Polish dead, Poland's army retreated to Warsaw. By then, more of Germany's, British and Austria-Hungary's forces came to support the Moravian cause.

After the Polish defeat in Prague, the coalition army marched east, to Warsaw. Near Warsaw they were met with small resistance that retreated back inside the walls. After a few minor clashes, the fight broke out on Warsaw's eastern wall. There were many casualties, lava and ender pearls were used, and the coalition forces captured the wall, while Polish forces with trying to get them off. Many spectators from other nations like Solomon Islands, Britain, France and came to spectate, however in the chaos they were attacked by both sides, notably Poland and Germany.

Following the Siege of Warsaw, few days after, coalition forces from Germany, Britain, Spain, Belgium and the middle east took part in an attack on Szczecin. Not too long into the fight, Moravians joined too. The polish fortified a position in the southern part of the town, in front of the walls, and defended it.

In 2nd January peace has been signed by both sides.

6th of January 2019 MinskanRus demanded giving them the city of Valston. Poland didn't agree and then MinskanRus declared war on Poland. The peace treaty between the Polish Kingdom and MinskanRus has never been signed.

Civil War between Polish_State and Poland

Before Civil War, three countries were created in Polish lands. Krakow ruled by Loverboy_25, Pomerania ruled by MlecznySernik and Polish_State (After Polish Kingdom has been deleted, Polish State changed it name to Poland) ruled by Majoor_. Kraków was subject to Poland and was a kind of a Polish vassal. Kraków supported Modern Poland in every conflict, but Pomerania was enemy of Poland. This led to many minor conflicts.

In beginning of April POGKPP bought Gdansk and started to invite Polish cities. In few days a lot of Polish cities joined, and Poland was reborned.

On April 13th Mlecz was crowned king of Poland, and Pomeranian kingdom was renamed to Poland.

When Snowyy4K betrayed Poland and sold Polish Republic for Denmark, a lot of other polish cities they "rebelled" and joined new Polish Kingdom (before that known as Pomerania). Therefore, Denmark declared war to Polish Kingdom.

On 29th of April 2019 Denmark raided Warsaw and other cities on south of Polish Kingdom. Then, polish army came to Warsaw and started fight with Danish Army. Poles called their allies, like a sab2003, EggzOnToast and their country allies. War was big - about 20 soldiers took part in it. Battle started under Warsaw and moved under Cracow. War ended with Poland losing their defensive battle.

Dymoslaw left Polish Kingdom, scammed Poles for 400g and made Silesia with his friends. Actually, Polish Kingdom and Silesia are allied with theirselfs.

After Polish annexion of the Kiev, The Great Roman Empire developed a hatred towards the Polish Kingdom. A few hours after it, some battles started. The biggest one was Battle of Balti. Day after that Polish diplomats decided to disband the Kiev and get back the Krakov. Terms has been completed, and diplomats of the both nations signed a peace.

When the Great Roman Empire declared a war on the illegitimate town of "Kijow" the Polish Kingdom sent  two polish units with three soldiers that were going to the "Kijow", for the defense. When Byzantine soldiers (YellowVictini and fritzstick )came, they were fighting with 6 Polish soldiers. The main part of this battle started near the Byzantine city of Balti. Then another polish soldiercame to Balti and it was now a 2v7.The GRE won the battle with 0 casualties and making the Polish forces claimhide,aswell as the death of 1 Polish soldier.

When xHyper20 got kicked, bartek50b took the title of the King illegally. Second Civil War in Polish Kingdom started. New self-appointed king didn't want to give the power back to the official King, POGKPP.

Retrieved from "https://earthmc.fandom.com/wiki/Polish_Kingdom?oldid=32915"
Community content is available under CC-BY-SA unless otherwise noted.