Qing, officially The Qing Empire (Chinese: 清帝國) is a nation that occupies the eastern part of Asia. Qing was founded in 2nd of May 2019 by Mr_X1234 and used to be called Manchuria, until 26th of June 2019, it was reformed to Qing Dynasty. The nation was disbanded in January 2020 due to all citizens being inactive or banned. Most residents are somewhat related to China. The main language is English, but Chinese and are spoken by a decent number of residents.

Qing borders the nations of Liao, Han, North Korea, Krasnoyarsk, Yakutia and Japan (Oversea border).. The capital is LiaoYang and the main cities are Hyesan, Seoul, Fengtian, Tsushima. In total, the nation has 23 cities and 88 residents, with the per capita rate being 3.82 individuals per city.

Soon after the formation of the nation, the government has been reformed into a federal empire. The Qing is governed by an emperor, along with the ministers and the representatives. Royalists are related family and advisers of the emperor who can fill his role in his absence. The Ministers assist the emperor doing fundamental head of state tasks and are elected from the current representatives. These tasks are divided in three topics, Foreign Affairs, Economy and Development and Defense and Expansion. The representatives have the right on voting important matters of state in the Manchurian general parliament. There are special representatives that have the rank of governor for their respective regions and are in charge of maintenance and expansion. The many towns that are part of the Empire have the right to elect representatives. The amount of said representatives is a fixed number (currently 5). Elections are held every 15 days for minister and representative roles. The government is always dependent on the final decision of his majesty, the Emperor of Qing, to maintain an equal separation of powers and guarantee stability. Manchurian's are very proud of their government form, one of the very rare forms of democracy found in Asia and often join political parties to actively participate in elections.

The Qing Armed Forces is a volunteer force made up from all the citizens in the Empire and is supported by the Custodes, the Imperial Royal Guard. The Qing Army are divided into a hierarchy that have 3 ranks: Emperor, Custodes and Soldiers. The Emperor leads the entire army and send orders to the soldiers. Custodes are guards of the Emperor that protect him at any cost. Soldiers are everyone else that is not Custodes or the Emperor in the army. The Qing also got a group of Inquisitors who serve as secret police for the Emperor.

Qing also got a official army uniform, it isn't obligatory but all Qing citizens can use it.

Qing borders the nations of Liao, Han, North Korea, Krasnoyarsk, Yakutia and Japan (Oversea border). The entire mainland is covered by lush forests and mountains, it borders a cold water ocean. Qing also used to own one of few islands in Korean peninsula making Tsushima a strategic outpost.

The small and peaceful nation was originally a lone temple in the vast empty region of Manchuria. During this time the Manchu Warlord Mr_X1234 developed a great friendship with the Mongolian Khan EternalFlavour. The friendship between the two leaders will develop in a formidable alliance that still exists to this day. The temple of Hyesan grew significantly with the help of the new Mongolian ally, developing quickly into a city. During this time however a new power started to settle near Manchuria, disturbing the peaceful region. This was the Liao Empire, a nation made entirely by Chinese players brought by the YouTuber Zi_Min. Small border conflicts became more frequent the more Chinese players settled in the region until it eventually escalated into what is today known as the Manchuria-Liao War. Because of this invasion the new-born nation was, as many Manchus refer to today, "born in fire”.

While border disputes between Liao and Manchuria were reaching it's peak an curious development took place, Brealsk, mayor of Changchun at the time a Liao city, decided to try to put an end to the conflict. After contacting the Manchu Emperor Mr_X1234, the two leaders met outside the city walls with their respective banners to talk peace. After a few tense moments the situation cooled and the two exchanged compliments for their bravery in battle and banners. After the event both the Manchurians and the citizens of Changchun built a road connecting the two cities in sign of the new developed friendship. Changchun will leave the Liao empire shortly after and continue friendly interactions with the Manchurian Empire and form the nation of Jin.

With the war with Liao long over the Kingdom started rapid development of it's infrastructure system. Hyesan was modernized and the construction of the new capital, LiaoYang ,started with the masterful hand of the master engineer Goldsilentcat. The capital was moved on the 2nd of June with a big ceremony. On the diplomatic side the Emperor Mr_X1234 proposed to from a United China Council to the Qin Emperor XDA1. The council formed and it's formed by all of the Chinese nations and warlords in hope of keeping the empire peaceful and united. The first real challenge for the council was the Chinese civil war where the united imperial forces had to put down a rebellion led by the "traitor" nation "China" in Qin territory.

During the the development era Manchuria managed to expand it's resources stockpile significantly, making it de facto independent from any foreign goods.The Manchurian minister of economy, SatanV2 used this opportunity to open a shop with Manchurian products in LiaoYang to fund further projects in the nation. The shop was a complete success and soon LiaoYang would become the trade capital of northeast Asia. Emperor Mr_X1234 and Siberian Khatun Zaroquen would also form the Asian Prosperity Alliance, a group dedicated in maintaining fair trade and prosperity in Asia. Manchuria expanded significantly, both in borders and members since the beginning of the economic boom becoming a well known trade center worldwide. During the great economic boom Manchuria renamed itself into Qing on the 26th of June 2019 to symbolize the new era of prosperity and power that was about to begin.

Since Manchuria evolved into the Qing Dynasty the nation saw a huge influx of new talented players. The infrastructure has also been expanded greatly connecting the newly founded towns of Hulun and Harbin.

The Empire also expanded it's territory, annexing a large part of Korea and investing in the revival of the region by rebuilding the devastated abandoned towns in the area like Busan.

The Empire also started assuming a new position as one of the biggest trade centers worldwide and not only in Asia, further developing relations with foreign powers.

During this time the Emperor Mr_X1234 got married to Khatun of Siberia Zaroquen, uniting the two nations in an even stronger bond.

Qing continued to grow significantly in it's economy, population, and military until Late July 2019.

In early august, Mr_X1234 had to take large absences from Qing due to work. Qing, without it's emperor, began to become unstable and secessions began occurring in August and September.

MichaelMouseStar was chosen as "President" of Qing, the 2nd highest level of power in Qing in August 2019.

Qing got renamed to Rep_of_China in-game after RatDogGuy, one of Qing's oldest members left for Niger. Another nation named Qing was made shortly after the name change.

From September 5-6 2019, an operation was carried out by RatDogGuy and reptiluracs to steal most of Qing's villagers, gold, beacons, and spawners. The operation, caused extreme outrage in the EMC community since the goods stolen were common and RatDogGuy had access to them to begin with.

The Empire is a shadow of it's former self, only ruins and tales remain. The fundations are still there however, will the once powerful Chinese nation one day rise again?

On December 15th Emperor Mr_X1234 came back to emc starting a massive propaganda campaign to bring China back to glory.

Many towns have been reclaimed in the following days [4 in total] and the population started to rise once again.

Is this the return many were expecting?

In the following days Imperial loyalists and towns answered the "Imperial Call" and started joining back, many prominent Qing figures returned, with hopes of rebuilding the ancient glory of the Empire.

However, some nations didn't see the return as positive and are concerned what the Dragon's plan shall be for the future.

Many profited of the Empire's demise however a famous quote reads: "The Empire long united must divide, the Empire long divided must unite! Thus has ever been". Romance of the Three Kingdoms

With the ban of the major Qing officials, including the emperor Mr_X1234 himself, Qing quickly fell into ruins. 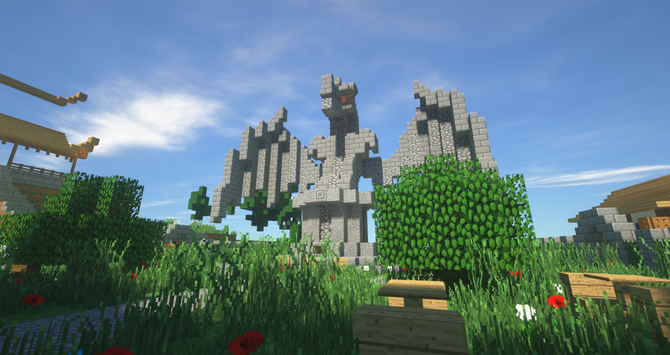 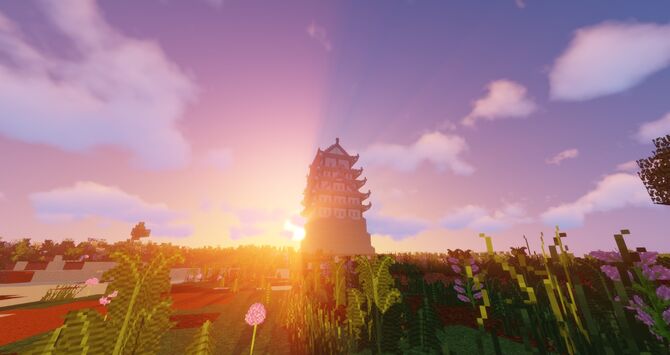 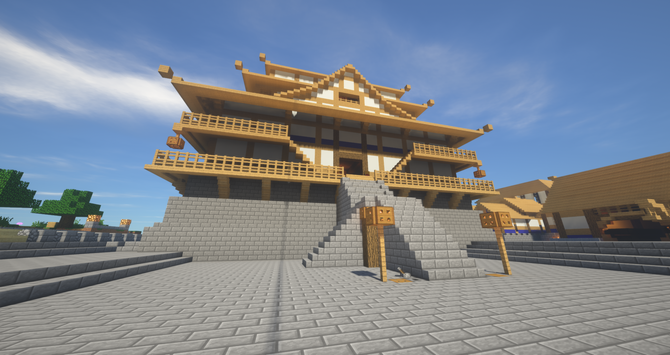 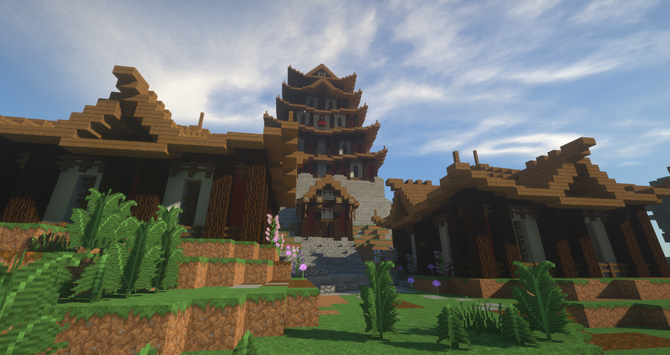 Qing have six iceways and one railway that unite half of their cities and some foreign cities. Most of those iceways are maintained by Qing even if some towns are outside Qing sphere of Influence.

Qing is a member of House of Uesugi and Asian Prosperity Alliance, the emperor Mr_X1234 is also one of the leaders of Uesugi. Qing holds good relations with most nations on the server, mostly because it being the biggest trade center of Asia.

Qing has a rich military past, having fought four major wars until now and being involved in numerous skirmishes, these being:

The Qing during it's golden age had 23 cities across 3 Nations, these being:

While Qing was inactive, many nations started eating away at the area where Qing once was. Attacks of towns from nearby nations still occur as recent as 12/25/19, and as the Ice highway network in Qing has decayed and harder to use, it is advised to keep caution when travelling outside of the capital and keep a tab open on the Dynmap to see if you are being tailed by a player.

Notable people who may not be in Qing today, but whose actions and dedication forged our history.